The movie focuses on two ordinary suburban families in the 70's as they go through different aspects of their lives dealing with the pursuit of the meaning of life. As we follow different characters struggling with facing the truth of life.

Ben H...(read more) ood (Kevin Kline) is the father of 2 children (Ricci and MaGuire) who pretty much goes through his everyday life thinking he knows what's best for his kids, eventhough he doesn't have the slightest clue of what's going on in their lives, even when he tries to be a father, he's unsucessful because he tries too hard without having the emotions. There's a scene that shows this very clearly when talking to his son Paul (Tobey MaGuire) about masturbation, this conversation completely peels off of Paul and comes out as awkward and fake and in the end becomes more embarrassing for Ben than for Paul. Ben is so fake, he's pretending he knows so much about the world and being and adult that he forgets what life really is about, not only Ben but people in general. We see it all over, on the train people read newspapers pretending to give a damn about the world, at work pretending to be serious about your life but without really being apart of it. Ben also grows more and more apart from his wife Elena (Joan Allen) as he's having an affair with Janey Carver (Sigourney Weaver) who just becomes more and more bored with Ben and people in general, when in fact Janey is the most boring person herself, this she doesn't even realize. Ben's wife Elena has her own issues to deal with, not only does her suspicion grow about Ben having an affair, but really she's also affraid of being an adult, she often longs back to the time when she was a kid herself and asks herself, after having seen her daughter Wendy (Christina Ricci) bicycle by, when was the last time she rode a bike? How many years have it been? ultimately resulting in Elena taking her old dusty bike out from the shed going for a ride. Elena is the symbol of the pain of growing up, though she's a full grown adult, she's still struggling to accept this and things certainly doesn't get better when you have a husband who's having an affair. The exact opposite can be said about her daughter Wendy who's trying to grow up too fast already at an age of 14 experimenting with sex and pretending to be interested in politics, she already has a relationship with Mickey (Elijah Wood) the son of Janey and Jim Carver (Jamey Sheridan), but at the same time shes trying to seduce Mickey's younger brother Sandy, who's basically still a little kid, he even still plays with toy soldiers. Mickey Carver is probably the most "normal" person there is, in the sense that he's not trying to be anything else but himself, he the kind of pure and honest person that just takes things as they come, he's does his homework, kisses girls and plays outsite during the big Ice Storm. He acts out as a normal kid, going through the normal process of every day life and growing up. This Ice Storm as Mickey so calls pure:

"When its freezing, Because it means the molecules aren't moving, so when you breath, theres nothing in the air, you know, you breath into your body, the molecules have stopped, its clean."

I think this also can refer to Mickey himself, his soul is still uncorrupted, so literally he himself is clean.

When Mickey dies in The Ice Storm and is found by Ben - after a rather discomforting party where things ended badly both for Ben and Elena but also between Janey and Jim as truths about the affair came into light - Ben in the very last scene untimately breaks down, maybe realizing that one of the few true, pure and honest persons there was is gone, and Ben now looking at his own son Paul, just as pure as Mickey, comes to terms with what kind of fake person he's become and how he's neglected his own children.

The Ice Storm is a very satisfying movie to watch, because it deals with the human nature in ways we can relate to, the characters seem very real and like real life so fragile as well.

On the technical side the movie features some really gorgeous cinematography of the icy cold crystals dangling from the trees and the wet gray landscapes that blend in with the story. Also the musical score is terrific and almost haunting, it really captures the essence of how lonely and fragile the human spirit can get.

Ang Lee has crafted a very honest and deeply touching movie, also the acting is fantastic especially from Kevin Kline and Joan Allen but also from Jamey Sherridan who plays Jim Carver, whom basically doesn't have a very big role, but got a really hard scene where Ben brings the dead body of Mickey to Jim's doorstep, Jim bends down and lifts up Mickey's lifeless body and there's a cheer pain of despair in his face, it's so heartbreaking, and only something a great actor could bring to life
Cronenberg
08/07-2008 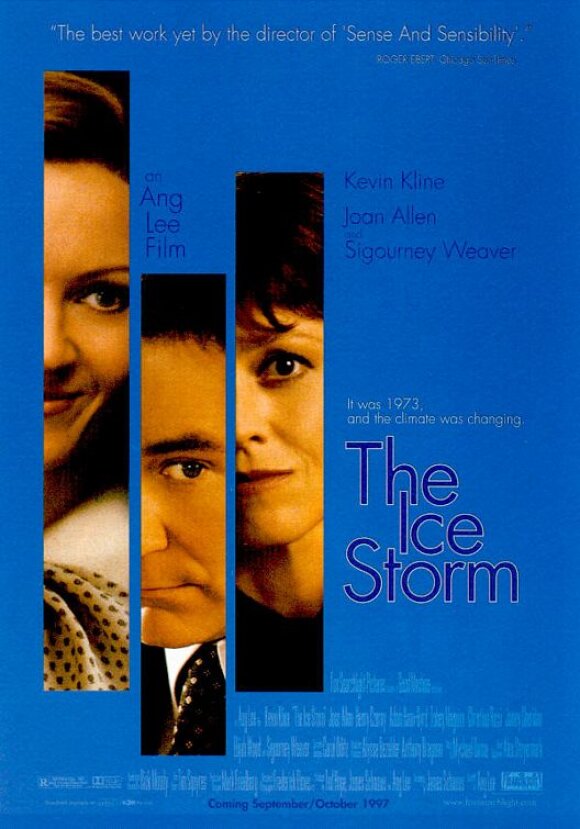